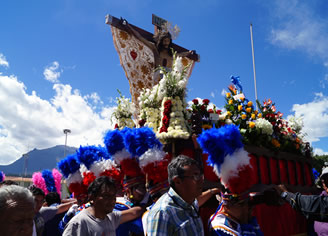 Also known as the “International Friendship Capital”, it is located at  3090m / 10 138 ft, to 408 Km North of Lima city, on the banks of the Santa River, between the Cordillera Blanca and the Cordillera Negra. Is the capital of Departamento de Ancash (Ancash state) and the seat of government of the Provincia de Huaraz (Province of Huaraz), its population reaches around 130 000 inhabitans.

Huaraz city is a necessary point to be visited for all those people who love adventure sports in Peru, from this city you access easily to the trekking circuits and to the mountains to climb in the Cordillera Blanca, Cordillera Huayhuash and Cordillera Raura. In Huaraz is a morden city, where you can find many places where to stay, from guest houses to three start hotels, good quality restaurants, cafeterias, bars, discos, travel agencies offering tours around the mountain ranges and to the Callejon de Huaylas, banks, ATMs, exchange currency houses, etc.