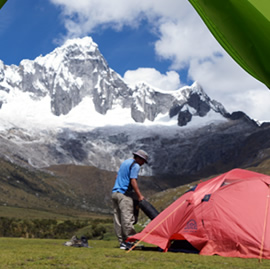 Without doubt it is one of the most popular trekking routes in the Peruvian Andes; making this circuit you will see almost all the most important Peruvian peaks in few days, many lakes and rivers.

The trek wanders through beautiful landscapes composed of snow-covered peaks like Alpamayo, which was voted “the most beautiful mountain in the world”; lakes, and green Andean vegetation. 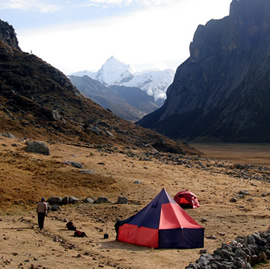 New trekking circuit, making this route we see the flora as well as the wild animals, have the opportunity to see many mounts among them the impressive Huantsan 6369m, known as the Peruvian K2.

Pisco 5750m, is a mountain that have an easy access to be climbed, offers a good experience for those people who never reached a snow covered summit.

See all the tours

About the Cordillera Blanca

The Cordillera Blanca is an incredible destination for trekking and climbing tours in Peru. It has abundant native flora and fauna, is culturally rich, has fascinating ruins of several pre-Inca cultures, and preserves some remnants of Inca infrastructure as well.

The Cordillera Blanca range, located in the north of Peru, has a tremendous concentration of 6000m peaks. The mountains run roughly north to south and are easily accessible from the Callejon de Huaylas (Huaylas Valley), which lies to their west.

In 1975, the Cordillera Blanca or Yurak Janka (in the Quechua language), “The highest tropical mountain range in the world”, was declared Huascaran National Park. In 1977 and 1985 UNESCO declared this protected area as “Biosphere Reserve” and “Natural Heritage” respectively.

Between the dramatic peaks of the Cordillera Blanca the valleys are dotted with stunning turquoise glacial lakes. Most treks follow these valleys, which run west to east through the mountains. Among these mountains and valleys is where most of the adventure travel and tours in the Peruvian Andes and in the Cordillera de los Andes in South America take place; activities like: trekking, hiking, mountaineering, climbing, mountain biking, horse riding and others.

Overall our Santa cruz trek was amazing and I would do it again in a heartbeat. Not only were the sights spectacular, the staff was so amazing as well. Our guide was fantastic and spoke great english.

What can I say other than WOW.
What an amazing job done from all of the team at Go2Andes. Christian was fantastic at arranging all the details of the acclimatization hikes, mountainerring course, eventual climb of Vallunaraju, transport, porters, etc.

A university friend and I did the Santa Cruz trek over 4 days. Although this was the rainy season, and not ideal for trekking, the scenery was absolutely stunning (where it wasn't obscured by clouds). Furthermore, our experience with Go2Andes was first rate.

See all the testimonials