About the Cordillera Blanca 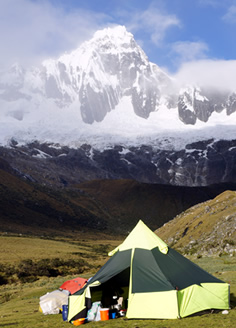 All the mountains mentioned above can be seen while walking the Santa Cruz - Llanganuco trekking tour.

This abundance of snow covered peaks feeds the rivers and streams that water the valleys known as the Callejon de Huaylas and the Callejon de Conchucos, which are located on the west and east side of the mountain range respectively.  The Cordillera Blanca also has great biodiversity, with 112 registered species of birds including residents and migratorials. There also have been recorded 779 species of plants belonging to 104 families and 304 genuses. Without a doubt the name “Cordillera Blanca” is synonymous with beauty.