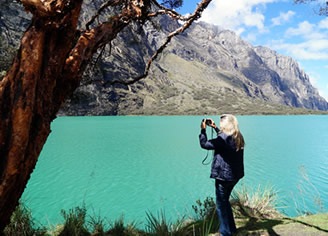 This one-day bus tour starts in Huaraz, a city located at the foot of the Cordillera Blanca on the banks of the Santa River.  We begin by heading north, passing along the way various towns and villages, and stopping at interesting places such as Anta, which has a spectacular view of Huascaran, Peru’s highest mountain, and Carhuaz, which is a traditional Andean town famous for its ice cream. We also visit the Campo Santo where the town of Yungay was once located until it was completely buried by an enormous avalanche caused by the earthquake of 1970, and which originated on Huascaran.  Only the palm trees from the plaza de armas, pieces of the broken walls of the church, a twisted bus, a few scattered boulders, and the local cemetery remain as witnesses to the disaster.  We then continue north through the relocated modern Yungay, where we turn east and climb switchbacks to enter the Llanganuco Valley, which is situated in Huascaran National Park between the towering summits of Huascaran and Huandoy.  Here we visit the two beautiful Llanganuco lakes, which are surrounded by banks of Tortora reeds, and by fragile forests of some of the world’s highest growing trees, Quenuals and Quisuars.  The lakes are called Chinacocha and Horqoncocha, names representing the belief that one is feminine and the other masculine.  After a stroll around the lake we return by the same route to Yungay and then continue north to Caraz.  Caraz is the last important town in the Callejon de Huaylas and is famous for its dairy products, especially “manjar banca”, a milk-based sweet.  We have lunch in Caraz, and then make our way back to Huaraz stopping in Tarica, a village known for its handicrafts, where we do a bit of shopping for souvenirs.